As their name implies, motion sensors detect motion. Therefore, they are an excellent add-on accessory for higher home security. Although motion sensors or motion detectors – if you prefer, are usually installed outside, they may also serve inside – and not always for security reasons.

Motion sensors installed inside the house may tell you when somebody is moving around the house – an intruder. But also, when the kids come home late or try to get into a room, where they are not supposed to go. The motion sensors also tell you when the cat or the dog also goes into a room that’s not supposed to go. Or if there’s any movement in a room that’s not occupied for some reason.

Motion detectors are often parts of a home security system among equipment, like security cameras, alarms, and other sensors (for smoke, carbon monoxide, et cetera). They are usually installed at the perimeter of the house and in various parts of the yard to detect motion. And although they will notify you even if they detect a cat passing by, they will also inform you about someone approaching to ring your bell. Most importantly, if someone is trying to look through your ground-level windows or attempting to break in.

How do you get notified by the motion detector? 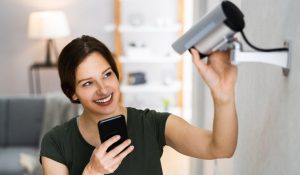 at home. If there’s an alert for some motion, it appears in the control panel which takes a turn to alert the monitoring center. Some of such systems may also be connected with surveillance cameras that record the motion/event. When they detect motion, the sensors turn on lights, trigger the connected CCTV system, or sound the alarm.

Although there are various types and models of motion detectors, and technology keeps evolving, they sense motion, temperature, radiation, or vibration in the radius they cover.

Different types of motion sensors work in a different way

·       Ultrasonic motion sensors emit ultrasonic sound waves, which bounce off nearby objects and go back to their starting point. When the sound wave is interrupted by someone moving, the equipment triggers the alarm or recording camera – anything is connected to.

Is it worth getting motion detectors?

Can the motion detectors make mistakes? Of course, they make. There are plenty of incidents with false alarms, but you shouldn’t get discouraged.

Besides, there are also dual motion sensors. These ones combine two technologies in one system and they are quite reliable since one verifies the other.

There are plenty of choices for all homes. Such systems are always a good idea for the prevention of break-ins. They are considered some of the best thief deterrents and the easy way to get notified about someone snooping around in your yard or even approaching your doors and windows. By having a security camera connected to the sensors and recording events, you also have images and evidence of a potential crime.

Whether you want to be alerted in one way or another and then notify the authorities or have the system monitored by a company that would call the authorities for you, it’s up to you. The second choice is always best, especially if you are very busy and when you are away. Whatever you decide, one thing is for sure. The motion detectors should be on your list of things to buy and upgrade – as far as home security is concerned.